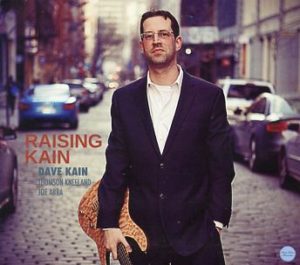 Review from Jazz Improv Magazine
By Brandon Bernstein
Dave Kain is an up and coming jazz guitarist. His latest album under his own name, No Pain, No Kain, is a terrific album showcasing Kain’s imagination as a composer, and featuring eight beautifully written original compositions. Kain is a well-rounded musician having studied with some of the most respected artists including John Abercrombie, Joe Carbone, Joe Monk, Bill Farrish, Greg Bobulinski, Jack Wilkins, Jay Azzolina, and Chris Morrison. In 2001 he formed the Dave Kain Group with a mission not to be restricted to playing only jazz standards, but also to focus on creating new original jazz music. No Pain, No Kain, includes Dave Kain on guitar, Matt Garrison on saxophone, Dylan Johnson on bass, Jon Cowherd on piano, and Jeff Hirshfield on drums. The CD begins with “Juris Duty,” an original contemporary composition. After the saxophone states the melody, pianist Jim Cowherd is the first soloist, and delivers an exceptional solo, highlighted by long, linear passages, as well as creative rhythmic ideas. Saxophonist Matt Garrison follows Cowherd, adding a stellar performance of his own, building on the energy Cowherd began. Kain steps up as the final soloist on this track – impressively expanding melodic ideas, expressed with the magnificent tone he had developed on his instrument. The song ends with the restatement of the melody. Throughout the song, the band is in sync, hitting punches and listening together well. The composition “Kolyma” is among the highlights of the album. The guitar and saxophone play the melody together, with the pianist playing the harmony in the background. The guitar and saxophone blend beautifully together. Kain is the first to step into the spotlight, playing a masterfully executed solo – with fluidity on the guitar, up and down the neck, crafting intricate ideas assimilating contemporary vocabulary. My favorite track on the album is the ballad “Own My Way Home.” Kain and Garrison begin the song as a saxophone/guitar duet. Kain’s chord voicings are outstanding in his accompaniment of Garrison’s improvisation. The rest of the band soon enters. Garrison maintains the energy, captivating the listener until the conclusion with powerful and mesmerizing melody. This composition showcases Jon Cowherd on piano who produces another stunning solo. No Pain, No Kain is a well-crafted album of contemporary jazz. The band is familiar with both the traditions of the music – past and present – producing a compelling hour of listening!-

Dave Kain – RAISING KAIN:
Dave (on jazz guitar) & his krew (Thomson Kneeland on bass and Joe Abba on drums) do their level best to enhance your jazz day on this splendid 11-song gem!  Pieces like “Hall Pass” will have you struttin’ through the halls with a clear smile on your face – no doubt!  If the title of “Miley Cyrus is the Devil” doesn’t have you up and dancing, the sweet jazz issuing forth from Dave’s strings certainly will.  This is, in fact, one of the better jazz trios I’ve listened to in 2014… lots of original work makes it a stand-out from all the other “guitar trios” you’ll hear this year.  The recording is clear, crisp and is definitely one you’ll want in your collection for the long haul… my own personal favorite was one of the shorter tracks…. “On The Scene” just scrabbles right along at a high-pace & is better than a double (or triple) latte…. you’ll be spinning this one time & time again!  I give Dave & friends a MOST HIGHLY RECOMMENDED, with an “EQ” (energy quotient) rating of 4.99.  Get more